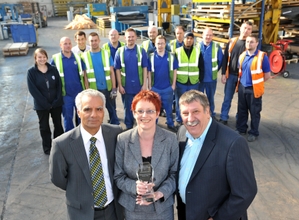 Manufacturing Excellence Award for Professional Polishing Services Ltd. - Awarded by The Express and Star in association with the Manufacturing Advisory Service –WM.

Formed in 1983 by Peter and Pauline Davies, PPS had a small 3,500 sq ft unit in Nechells with one Johannsen plate polisher and some smaller machines.

Following on from organic expansion the Company became the acknowledge market leader in sub contract mechanical polishing of stainless steel and occupies 40,000 sq ft with a huge variety of production lines and finishes.

In 2008 to celebrate the Company’s 25th anniversary Peter became semi-retired and stepped down as MD to make way for the General Manager and Director, Kirsty Davies-Chinnock, to take up the position of Managing Director. Excellent timing from his point of view as the recession swiftly followed.

Now in 2011 the Company is again re-investing in production lines and has an extensive capital expansion plan for 2012 to bring new technology to the UK and mainland Europe.

These videos fill a gap in the market and provide specialised information to their customer base so an understanding of the process is easily available.

Investment also continues in people with two apprentices currently employed by the Company as well as Industry courses freely available to the commercial team to expand on their product knowledge.

Kirsty Davies-Chinnock has expanded further on the Company’s CSR with charitable donations and support for events such as the Gateley Five for Fifty Run in September where 5 members of PPS (including Kirsty) ran 5K each to raise money for The Foundation for Conductive Education.

With PPS looking forward to celebrate their 30th anniversary in 2013 they have ambitious plans for new finishes, technology and development which continually building on their proud history of excellent customer service.

In 2009 Kirsty was pleased to receive the Attwood Award for her services to Industry. Currently the market leader in stainless steel sub contract mechanical polishing. Continuous re-investment has built an impressive portfolio of production lines. Additional Cap-Ex plans for 2012 for bringing new technology to the UK and Mainland Europe.