PPS Finalists in the Inaugural NatWest Venus Awards in Birmingham 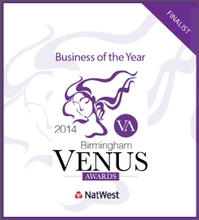 Kirsty Davies-Chinnock is a Finalist in the NatWest Venus Awards in Birmingham, with Professional Polishing Services in the Business of the Year Category.

Coined the Working Women’s Oscars by a UK national television station, the Venus Awards certainly earns such a sophisticated analogy. The Awards night oozes glitz and glamour with the women dressed in ‘Long and Luscious’ and the men in ‘Black Tie.’ Always held in sumptuous surroundings, the evening revolves around the presenting of a Venus to 14 women across varying categories. Acknowledged as leaders in their various fields, these hard-working local women encompass a full array of the community—be they entrepreneurs, executives giving their all to their company, or simply tireless workers helping others.

This is the first year the awards are being held in Birmingham and the winners will be revealed at a glittering ceremony on the 26th November 2014 at the ICC.

The short list is available here to see who Kirsty is up against in her category.